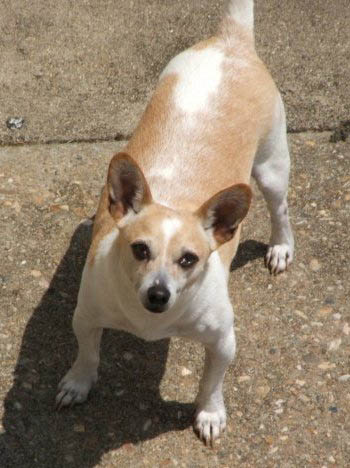 Milo was part chihuahua, part Jack Russell and who knows what else. He was a little bouncing, endearing runt of a dog who was full of life, irrepressible, energetic, lovable and single-minded. We got him at Toombul Shopping Centre to surprise the boys and celebrate our first Christmas in Queensland’s capital city. He had a coat of white with shades of light brown, big floppy ears and an eager tongue. We brought him back in a little cardboard box that could barely contain him, and my wife did her best to keep the box on her lap and the bouncing Milo in the box. He was so tiny!

The boys had been long begging us for a dog, but luckily the fact that we were long-term renters in Alameda, Walnut Creek, Stanford and Palo Alto allowed us to easily explain that pets were simply not allowed. But now in our first house with a fully fenced in backyard and a secure enclosed back porch the old arguments were no longer as effective or irrevocable. We sneaked Milo into the enclosed back porch in his box, took him out and hid him under a baseball hat. The hat magically moved on its own in tiny spurts as Milo propelled himself to and fro. We called the boys out to the back porch to see the moving hat and quickly they rejoiced in discovering Milo himself—tiny and vulnerable, yet repressively energetic!! In many ways he represented some of the best qualities that I don’t display with the same regularity and consistency.

Milo always reacted with unbridled enthusiasm and abandon when he saw those who loved and cared for him. How rarely I react with such enthusiasm to those I love. As soon as he heard my car pulling into the drive he began leaping at the side gate of the backyard with tiny yelps of enthusiasm as only a Jack Russell can. I would walk to the gate, arms filled with bags and scores, and sometimes Milo would leap up high and actually scramble over the gate and into my arms with his tongue wagging uncontrollably, oblivious to the papers and scores flying about the path. Even though some of my friends told me that dogs simply knew where their meals were coming from, I always believed that Milo’s behavior was more than a trained response.

Milo was single-minded about what he wanted. True, it may have only been food, basic needs, a warm rug, a cold drink, something to play with, attention, but he was amazingly focused and consistent. I think if I could develop the same consistency and single-mindedness, there is little I could not accomplish. Milo was a very trusting creature. He never knew when the sudden tease would come, the angry word for a misdemeanor, or the inexplicable, sudden and arbitrarily illogical human reaction, yet he forgave quickly, returning to snuggle, cuddle, play or simply sit quietly and closely. How I wish I could be as trusting without expectation or the worry or fear of a sudden unpleasant reaction or rejection.

Milo played with absolute abandon, no holds barred. He was in the game with his whole heart and soul. For just as Mr. Smart said of his cat Jeoffry so it was with Milo, “there is nothing brisker than his life when in motion.” Milo relished his simple games, routines and tricks and rarely turned down an invitation to play. I sometimes can’t remember when I’ve played with such enthusiasm and zest. Sometimes I can’t remember when last I played and didn’t think about work!! I need to try harder to enjoy and appreciate the simple pleasures in life just like Milo did and make time to play. Smart also described well the feeling of peace emanating from his Jeoffry, “for there is nothing sweeter than his peace when at rest.” After a long and energetic day, Milo would cuddle up sweetly in his corner of the sofa with a sense of absolute contentment and serenity.

Milo was happy and lived his life to the fullest with a trusting quality as if he believed that all was well in the world. How often my own sleep seems riddled with worry, frustration and petty anxiety. As Spock said, I too should have faith and believe that the universe is unfolding as it should.

Milo is gone now. We heard that he passed away a few weeks ago. He was not aware of how his life exemplified so many good habits and characteristics that people too rarely show on a consistent basis: sincere enthusiasm when greeting friends and loved ones; single-minded in achieving goals, a trusting and loving nature in spite of so many reasons to not trust, enjoyment of the simple pleasures of life, his love of fun and playing and most of all his living a contented and happy life.