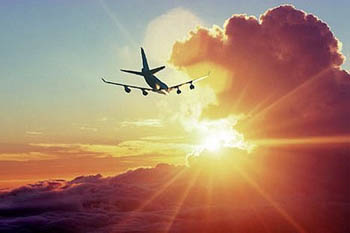 I had just graduated from university and was deep into spiritual searching, and constantly reading Herman Hesse, Joel Goldsmith, Krishnamurti, and Yogananda. I was hoping to study in Hungary in the fall and needed to audition for my future teacher who was teaching in the States over the summer. I booked my first ever flight on USAir from Pittsburgh to Boston—a commuter flight containing mostly business men in tidy suits with leather briefcases who seemed bored and slightly annoyed at the inconvenience of having to sit in a crowded plane before their important meetings and business in Beantown. For me, however, this first flight was more than an exciting adventure—it was a sign of my growing independence and the beginning of a spiritual journey. It was, as the cliché goes, the first day of the rest of my life.

How could some people be reading nonchalantly or attempting to become comfortable for a quick nap, while the plane was actually starting to move? My eyes were wide and glued to the window! The powerful currents of air that were spewing from the engines violently assaulted the green foliage surrounding the runway, causing it to bend submissively. When the jet finally began the quick acceleration for takeoff, I braced myself needlessly as if preparing for the leap to light speed. As we ascended, I was thrilled at the sudden fall away of the land and relished the panoramic view on this clear July morning. We turned for a pass over the city, and I saw for the first time all the familiar places, buildings and streets from a new, and most wonderful perspective--the Civic Arena, the US Steel Building, Forbes Avenue, the Hill District, and my old campus on the bluff where I had spent the last four years studying music and attempting to shed the last vestiges of my post-adolescence. I thought of the many people down below whom I knew and loved—from my closest friends and family to the familiar, unnamed folks working in stores and shops around the city.

I was experiencing an amazing sense of detachment and awareness. From this new perspective everyone and everything below seemed so small, so fragile, so precious, and so ephemeral. Soon only a carpet of clouds could be seen below, and I then realized that those of us in the plane were equally vulnerable and fragile. How easily we see things in perspective amidst unusual circumstances, yet how quickly such objectivity passes in the midst of busy, unconscious living. Everyone in the cabin had finally settled down to read newspapers and magazines, munch on salty peanuts, sip on soft drinks and coffee, nap, or look over important papers. The flight crew stood around the galley, talking quietly and occasionally giggling as they went about their routine tasks. Everyone seemed totally absorbed in what they were doing, unaware that they were being observed and blessed. Time seemed to stop. I even began observing myself in the act of observing. My thinking stopped and I was truly present.

I have flown many times to many parts of the world since then, but I still remember with gratitude that first taste of joy-filled detachment, that is as unforgettable as a first kiss. Now many years later, when I sometimes catch my older self, impatiently eating the peanuts, gulping the diet drinks, browsing through the magazines and looking over my important work, I stop everything, close my eyes, breath deeply and gratefully, and remind myself to be the alert and joy-filled youthful observer again, to be present again.