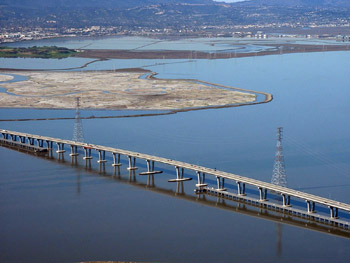 She always worked the toll booth in the evenings when the sun was well on its way down and the chilling winds from over the bay began to blow with much greater strength than one would have thought after a mild, pleasant day. She was a large, earthy black woman in her late thirties or early forties whose wide, corpulent face never revealed a smile or the slightest sign of interest in any of the people passing through her portal. Her slightly graying hair was medium length and always pulled back in a bun, but recalcitrant strands seemed perpetually intent on not being put in their proper place. The sturdy, masculine, light blue uniform with navy blue trim strained to contain her large feminine frame. Her long stick-on cerise fingernails gave the appearance of manicured perfection, but seemed incongruous when juxtaposed with such strong fingers, wide hands, thick wrists and powerful arms. She showed no joy or overt dislike of her work, but performed the repetitive duties with a practiced, detached efficiency—dollar in and a receipt, dollar in and no receipt, four neatly prepared dollars ready as change for a five, a five and four ones ready to thrust out for a ten. The small portable radio near the cash register was always playing loud Motown hits of the 70's, but the tiny speaker had such poor fidelity that everything sounded like incomprehensible treble distortion with a funky beat.

Even after it was obvious that I was a regular commuter on the bridge and that we certainly recognized each other, she never seemed to looked directly at me or uttered a word. Months and months passed, but whenever I ended up in her lane, I could never attract much eye contact or response, despite innumerable hi's and hello's. Her demeanor intimated that even the slightest response would signify a lowering of her guard, expose a small crack in her wall of indifference or show a sign of vulnerability to the outer world. As the months became years, I began to try and get into her lane deliberately to see if, in some rare moment of weakness, the familiar sight of me in my car might evoke even the most perfunctory greeting or salutation. But alas—nothing! At first I thought it was a question of raising the sheer volume of my one-word greetings, but after many long months I realized that getting louder was getting me nowhere. It didn't even seem like a conscious snub on her part, just an unbelievable detachment for self-preservation. My mild annoyance with this situation never crossed my mind during the busy workdays, but as soon as I headed home and took the exit off 880 out toward the bridge, the half-humorous feelings of frustration and indignation surfaced without fail. All the way to the tollgate I would rehearse different scenarios and imagine the various responses I might actually evoke on that day. But true to form I never said the confrontational lines I planned, and she continued to remain oblivious. This situation became a humorous after-work obsession with me and I eventually decided that before I moved out of the Bay Area, I was going to get a response from her—one way or another!

One day on the way to the bridge it was a particularly cold and windy day--one of those wintry days when the wind swoops down ferociously over the wetlands, rolling green hills and flatlands surrounding the Bay. The tollbooths of the Dumbarton are especially exposed and seemed to shiver under the blustery assault as they clung to the cold pavement. The toll-takers looked particularly miserable on these days because the steady stream of commuters prevented any possibility of closing the windows of the booths for even a brief moment of respite from the cold air and relentless wind. They stood or sat on stools shivering near their ineffective little heaters as they constantly leaned out the windows toward the waiting cars and into the blustering column of freezing air. I don't know what got into me on that day, but something snapped and I decided that I would get into her lane and not move from her window till she said some word or phrase, or at the very least made some grudging acknowledgment of my existence as a recognizable person, not just another nameless, faceless commuter. As I worked my way over to get into her lane, many thoughts raced through my mind about what I might finally say to get a reaction. At first I thought I would try my usual "hello" but say it even louder and with an extra effort to sound cheerful and upbeat. Next, I decided that the game had gone on long enough and I would play the disgruntled customer who would demand loudly and with great indignation some simple courtesy. Another idea was to simply stop at the window and not move my car until she would be forced by the blowing horns of impatient drivers behind me to at least ask me why I was holding up the line of cars. As the twenty or so cars ahead of me moved steadily through her tollgate, I continued planning my attack. Now within mere seconds I would be the one handing over the dollar bill. The driver of the silver BMW ahead of me quickly handed over a crumpled dollar bill and pulled out at breakneck speed. I felt a sudden surge of adrenalin and nervousness in the pit of my stomach as I slowly pulled up to her window. She was there as she always was and, typically for this time of year, had on her heavy, official, dark blue jacket with the artificial black wool around the collar. The jacket was zipped up snugly, but because of its short length her wrinkled shirt, thick brown belt and part of her bare back were exposed. She seemed particularly grim and determined on this evening, performing her tasks with a forced efficiency and concentration undoubtedly to steel her against the uncomfortable temperature. In a split second, however, my resolve weakened, my indignation evaporated as I rolled down my window and felt the full blast of the cold air. Still seeing no eye contact, I looked up at her in the booth and heard myself say in an uncharacteristically jocund manner, "Are you keeping warm in there?" She looked at me squarely in the eye and with a surprised, broad grin said, "I sho' am tryin'." "Take care," I said as I passed over a dollar's worth of small change. "You take care now, too," she replied with a tired grin.

I floored the accelerator and zoomed out of her tollgate and out toward the bridge. Despite the gusty wind and cold temperature, I rolled down both front windows and let out a “yahoo” of victory and exhilaration. The wind roared through the open windows, the cold pouring onto me as the Nissan cruised fleetly up onto the bridge at nearly eighty miles per hour. I imagined that I was flying above the bay with the acrobatic seagulls that often flew directly into the strong wind high above the bridge, reveling in a suspended state of aerial elation. The tiredness of the day had been lifted, and I looked forward to getting home and having an espresso with my wife.